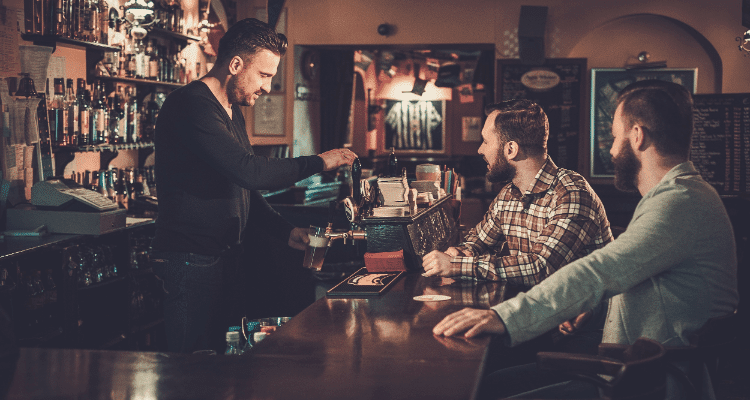 The Brazen head was established in 1198 and is the oldest pub in Dublin. The Brazen Head has a well-deserved reputation for great food, serving both traditional and contemporary dishes. Famed for our traditional stews of beef and guinness and Irish stew, these hearty dishes combine all the ingredients in one bowl. View Profile

Welcome to Grogans – a local pub in the heart of the city. A warm and friendly atmosphere that you would expect from your local, but with the lively buzz and intensity of an authentic Dublin city pub. Relax with a drink and toastie. Open 7 days a week, Grogans is the perfect spot to grab a light snack, a pint of porter or a pot of tea. View Profile

The Stag’s head is a traditional Irish pub Established 1780s. Visiting the Stag’s Head is a wondrous experience whether you come in when the premises is cosy, warm and glowing at night time, or in early morning when this old repository of liquid culture is radiantly illuminated by wafts of sunlight filtering through the stained glass windows. View Profile

Kehoes is one of Dublin’s best kept secrets on the City Centre pub scene. It is a traditional Irish pub with a warm atmosphere in the heart of South Anne Street. Everything here remains as it was 100 years ago. Pint Guinness is the order of the day. View Profile

The setting of Johnnie Fox’s is just like you have been invited to a 19th century rural Irish home, with food and service to 21st century standards. Whether you are looking to enjoy a wholesome pint of the ‘black stuff’, to get a glimpse of ‘old Ireland’, to enjoy a tasty meal, to enjoy the unique Irish atmosphere, or to witness a spectacular cultural show, listen to some traditional Irish music, Johnnie Fox’s most definitely has something for you…. View Profile

Established around 1818 Toner’s Pub is one of Dublin’s Oldest and most famous Pubs… Frequented throughout time by some of Ireland’s literary greats, including Kavanagh and Yeats. It is rumoured that Toner’s was the only pub that W.B. Yeats drank in. He was known to sip a sherry and leave.

John Kavanagh’s The Gravediggers has been part of Dublin since 1833, nestled in a quiet square beside Glasnevin Cemetery and over one million Dubliners that rest there. This Williamite Working Man’s Bar with no frills and is in the caring hands of the Kavanagh’s for over seven generations. They take great pride in offering a good product at a reasonable price with good service. View Profile

Mulligan’s is more than a Dublin pub; it is an Irish cultural phenomenon. It has a unique and colourful history, spanning over two hundred years. Mulligan’s has hosted the famous Judy Garland, Seamus Heaney, Con Houlihan, James Joyce and John F. Kennedy. View Profile

O’Donoghue’s is a historically significant drinking establishment. Built in 1789 as a grocery store, it began operating full-time as a pub in 1934. This pub is closely associated with Irish traditional music and was where the popular Irish folk group, The Dubliners, began performing in the early 1960s. View Profile

Serving some of the best craft beer available in Ireland, belting out unreal tunes & pizza & pint deals for 12 quid. Providing a mix mash of music including Queens of the Stone Age/The Beatles/Rage Against The Machine/Colm Lynch/Joni Mitchell/Pearl Jam/The Smiths/The XX…. View Profile