7 Things to do in Galway 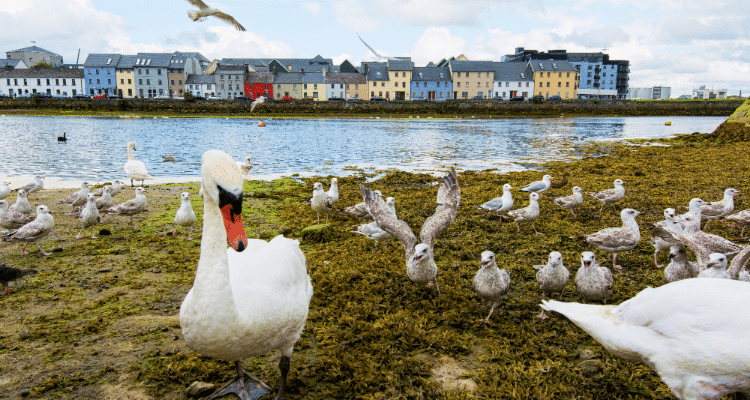 A highlight for many visitors to Galway City is strolling along the medieval pedestrianised streets. The area is characterised by boutiques, unique shops, cafes, pubs, & restaurants. It has rightfully earned its unofficial title as ‘The Latin Quarter’. Well, now it’s official and with support from Failte Ireland & Galway City Council, the area has adopted the name ‘The Latin Quarter’. View Profile

Salthill is a seaside area in the City of Galway in the west of Ireland.

It is a 2 km long promenade, locally known as the Prom, overlooking Galway Bay with bars, restaurants and hotels.

You can drop in at the Galway Atlantaquaria, run by the National Aquarium of Ireland, or watch the yacht sails zipping across the water in summer. View Profile

Explore the museum collection and engage with all the exhibitions, past and present. Current exhibitions include Keepers of the Gael, about culture and society in Gaelic Ireland between AD1200 and 1600, Revolution in Galway, 1913 – 1923, The Galway Hooker and A Triumph of Unconscious Beauty which depicts life in the Claddagh, Galway between the 1820s and 1930s. Learn all about Sea Science – The Wild Atlantic through our online worksheets. View Profile

From May to September you can see this boat up the River Corrib to the lake (lough) of the same name.

The Corrib River Princess sails twice daily from Woodquay in the middle of the city and does a 90-minute trip where you’ll journey through green, pastoral countryside, with farms on the south and east shore of the lake and heath and bog to the north and west.

The lake is also loved for its many islands, with more than 1,200 at the last count. View Profile

Galway being one of the liveliest pub scenes in Ireland has many interesting ones to go to. Step inside Tigh Neachtain’s pub on Cross Street and you’ll happily lose hours gazing at the knick-knacks and memorabilia while sipping a glass of Galway Hooker craft beer. Other great spots in the city include Murphy’s and Garavan’s. View Profile

Looking at the spanish arch, you can imagine how Galway was in the past. Once upon a time, Galway was a small fishing village. It grew in strength from the 13th century to become a prosperous walled town ruled by 14 merchant families, known as the Tribes of Galway. The old city walls are now incorporated into a modern shopping centre at Eyre Square, Kirwan’s Lane thrums with a bustling atmosphere and St Nicholas’s Church, completed in 1320, is where Christopher Columbus is said to have worshipped in 1477.

Galway is one of the best places in Ireland to visit for traditional music. This is a city that lives and breathes music, from the buzzing street buskers to the endless trad sessions all over town. Step inside a traditional music pub such as the Crane Bar, and you’re guaranteed an unforgettable night. View Profile